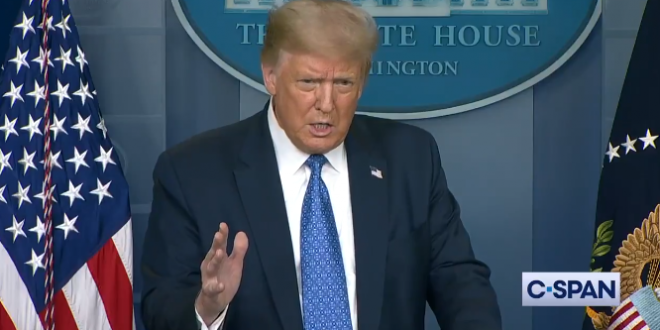 In an interview on Fox Sports Radio Tuesday, the president was asked by host Clay Travis whether he believes it’s hypocritical for NBA players to attack him and protest during the national anthem while keeping silent on human rights violations in China — a nation with which the league does big business.

“I haven’t noticed them sending things back at me, but I will say that I wouldn’t be that surprised,” Trump replied. “Some are very nasty. Very, very nasty, and frankly, very dumb.”

Trump went on to bash the league and its players for not being more critical of China. “The way they catered to China, the way they bowed to China, it’s a disgrace, frankly,” Trump said.

Trump said there is “a nastiness about the NBA,” the way the league returned. (Players kneeled for the anthem, have Black Lives Matter messages on jerseys.) “Ice hockey,” conversely, “respected the mores, they respected what they’re supposed to be doing,” he said.

Trump said “one of the great doctors” told him of college football: “‘These people are so powerful and so strong, not lots of body fat,’ although you could take a couple of offensive linemen perhaps and dispute that…’maybe none in some cases…they’re very healthy people.'”

Trump said golf and UFC haven’t lost anything “visually” with their pandemic setups, but basketball has, and also “the way they treated our flag and our anthem,” and “I looked at it and I couldn’t watch it,” while with baseball, “I haven’t made a ruling on that yet.”