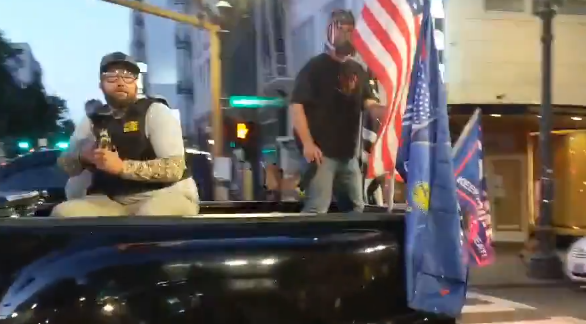 Hundreds of Trump supporters, some of them armed, converged on Portland late Saturday and faced off against anti-racist protesters as part of a “cruise rally” that resulted in a spate of violent clashes and at least one fatal shooting. Portland Police confirmed on Twitter that the shooting is being investigated as a homicide.  They responded and located a victim with a gunshot wound to the chest. Medical responded and determined that the victim was deceased,” a statement says.

Black Lives Matter protesters lined the sidewalks and stood in the streets while Trump supporters streamed through the city waving giant Trump 2020 flags and shouting. Members of the MAGA parade were seen deploying pepper spray and shooting paintballs at counter-protesters standing along the streets. A man in a white truck with Trump flags pointed a firearm at counter-protesters through his window after his car was pelted with eggs.

The big backlash going on in Portland cannot be unexpected after 95 days of watching and incompetent Mayor admit that he has no idea what he is doing. The people of Portland won’t put up with no safety any longer.The Mayor is a FOOL. Bring in the National Guard! https://t.co/bM6ypak94t

On Thursday, Trump’s aides said they were hoping to see more violence and chaos as part of their reelection strategy.