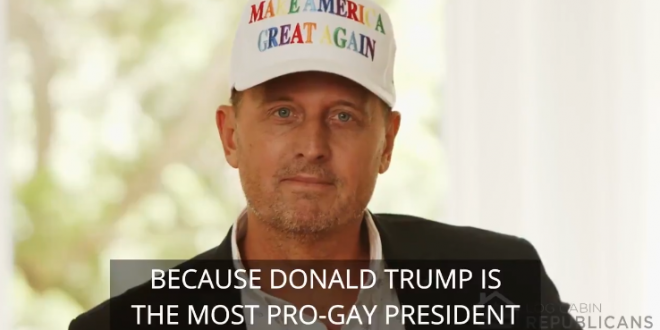 Democrats are using their convention this week to tout their agenda for the next four years, including their promise to stand up for the lesbian and gay community.

For years, Democratic Party leaders have taken for granted the lesbian and gay community — along with other minority communities — thinking they had no where else to turn. Those days are over. I’ve fought for civil rights for gay Americans for the past four decades.

Today, the Republican Party is delivering real results and leadership for our community. As Democrats spend the week declaring themselves the party of inclusivity, remember that actions speak louder than words. Today, the GOP has proved itself to be the true party of equality.

The Trump administration has fought against LGBTQ rights and rolled back protections consistently for nearly four years.

A video telling queer Americans that Trump has helped them meets the textbook definition of gaslighting. https://t.co/9iT5C7mLx2

What the fuck is this? Trump banned transgender people from the military! This tweet is such an embarrassment.

TRUMP’s Over 167 Legal Attacks against #LGBTQ Equality in 3 years, all documented: https://t.co/PDjLoaP49f pic.twitter.com/FlgIR5Jat2

Previous Ohio In Uproar After Trump’s Call To Boycott Goodyear
Next Labor Dept: Jobless Claims For Week Rise To 1.1 Million