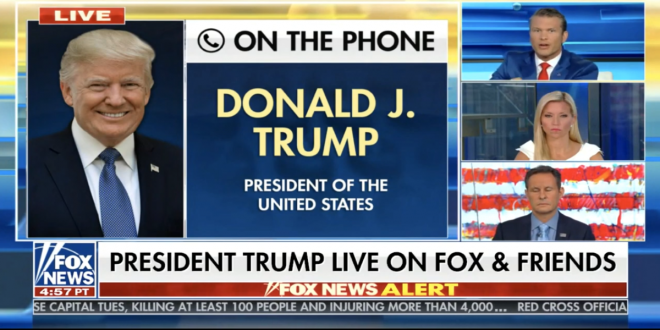 Trump: Mail Voting Will Drag Out Election “For Years”

President Donald Trump continued his attack on mail-in voting on Wednesday by claiming it would make the 2020 election “go on for years” due to delays.

There is no evidence of widespread corruption in mail-in voting that would delay the November results for “years,” and critics have accused the president of assailing such voting in order to undermine the results of the presidential election.

Just yesterday, Trump appeared to reverse course on such voting, encouraging Floridians to vote by mail. Trump claimed in an interview with Fox & Friends this morning that Nevada and New Jersey both present proof that mail-in voting gives way to widespread fraud and corruption.

I fear Republican sabotage of the USPS, including slowing mail delivery, is a Trump strategy to make voting by mail more difficult this fall. Request your ballots and return them as early as you can. https://t.co/LZONq8EPKE

Nevada has ZERO infrastructure for Mail-In Voting. It will be a corrupt disaster if not ended by the Courts. It will take months, or years, to figure out. Florida has built a great infrastructure, over years, with two great Republican Governors. Florida, send in your Ballots!

Trump on Fox & Friends is railing against Nevada’s mail-in voting, falsely claiming: “They plan to send these ballots to everyone who ever walked in the state.”

He also says that with mail-in voting that we may not know the results for “years.”

Misinformation on both counts.

Trump told Fox and Friends that “children are almost – I would almost say definitely – but almost immune from this disease.” They are not. https://t.co/yMNJMjyQzF

BREAKING: On Fox & Friends, Trump claims that Joe Biden is trying to get out of the Presidential debates.

This is an outright lie. Joe Biden has already committed to the debates and said he’s very much looking forward to them.

Trump says “with the possible exception of Abraham Lincoln, it’s true” that “nobody has done better” for the black community than “what I’ve done.” He’s not challenged on “Fox and Friends” on this statement. He then calls Black Lives Matter a “Marxist group”

President Trump didn’t attend the funeral of John Lewis and says he is still upset that Lewis didn’t go to his inauguration. And now, he is attacking President Obama’s speech at Lewis’s funeral saying it was “a terrible, terrible representation of what our country is all about.” https://t.co/SYW4LB5tWe

Asked on Fox & Friends about Hillary Clinton accusing him of sabotaging the Postal Service, Trump immediately pivots to bashing Clinton and never denies that that’s what he’s up to pic.twitter.com/zlEMwXxquw