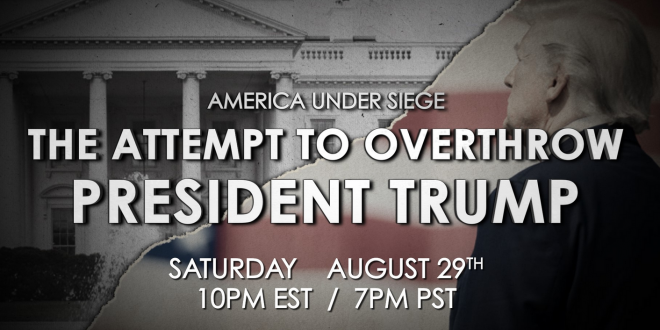 President Donald Trump praised a pro-Trump caravan of activists who moved into Portland, Oregon, on Saturday and whose presence there appeared to contribute to violent clashes in the city.

The day after a man was shot and killed amid confrontations between Black Lives Matter protesters and Trump supporters in Portland, he assailed only the anti-racism demonstrators.

In a tweet, Trump shared a video of the pro-Trump caravan driving into Portland and labeled them “GREAT PATRIOTS!” In another tweet, he referred to protesters in Washington, D.C., as “Disgraceful Anarchists” and said, “We are watching them closely.”

President Trump unleashed an especially intense barrage of Twitter messages overnight and Sunday morning, embracing fringe conspiracy theories claiming that the coronavirus death toll has been exaggerated and that street protests are actually an organized coup d’état against him.

In the early morning hours on Sunday, the president posted or reposted more than 80 messages, many of them inflammatory comments or assertions about violent clashes in Portland, Ore., where a man wearing the hat of a far-right, pro-Trump group was shot and killed Saturday after a large group of Mr. Trump’s supporters traveled through the streets.

One of the most incendiary messages was a retweet of a program from the One America News Network, a pro-Trump channel that advances extreme theories and that the president has turned to when he feels that Fox News has not been supportive enough. The message he retweeted Saturday night promoted a segment accusing demonstrators of secretly plotting Mr. Trump’s downfall.

According to the mainstream media, the riots & extreme violence are completely unorganized. However, it appears this coup attempt is led by a well funded network of anarchists trying to take down the President.

Previous Ratcliffe: I Ended Intel Briefings Due To Dem Leakers
Next VIRAL VIDEO: Covidiot Booted From AK Walmart After Shouting That Face Masks Are In The “Service Of Satan”