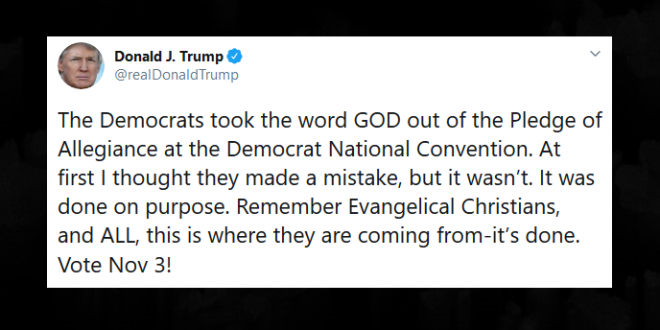 The DNC did not omit “under God” from the pledge, nor did they forbid its use. In fact, during every recitation of the pledge before each night’s events — the 2020 DNC lasted four nights — the phrase “under God” was included.

Political conventions are sprawling events. In addition to the “main events” that take place during the nationally televised program each night, individual caucuses and councils also meet throughout the week.

The Democrats took the word GOD out of the Pledge of Allegiance at the Democrat National Convention. At first I thought they made a mistake, but it wasn’t. It was done on purpose. Remember Evangelical Christians, and ALL, this is where they are coming from-it’s done. Vote Nov 3!

This is another straight-up lie. Here’s a link to the Pledge of Allegiance being said, with “under God” included. It was said that way every night of the convention. https://t.co/bqHrRS0Keo

You’re a pussy-grabbing, accused sexual abuser and rapist, serial-cheating, disabled-mocking, pathologically-lying corrupt racist sociopath who literally attacked the Pope. There is nothing about “God” that applies to you…

OMG! Those libs did what? They hate God they…hey, I hear them saying God in the Pledge. They must have put it back in to cover it up. I bet Soros was involved! And Satanic gourmet zombie chefs from California! Those crafty Libs and their God hating creative editing techniques!!

You lie about the weirdest things.pic.twitter.com/4xn5tpFVJG