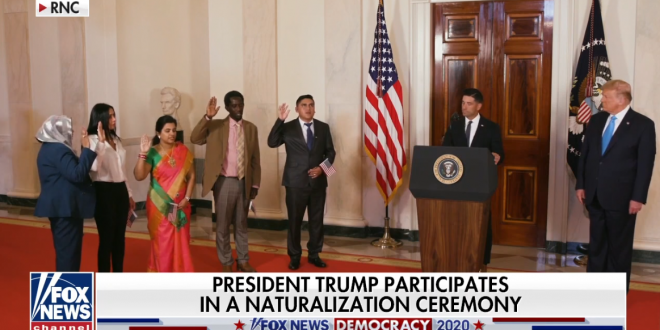 Trump arrived at a lectern set up in the White House’s Great Hall. There, acting homeland security secretary Chad Wolf waited, along with five candidates for naturalization: two men and three women, one in a headscarf and another in a traditional Indian sari. The five were presented to Wolf.

“On behalf of everyone here today,” Wolf said at the outset of the event, “I’d like to express my gratitude to you, Mr. President, for hosting this naturalization ceremony here at the White House.”

The Hatch Act broadly bars government officials from using government time or buildings — like the White House — for advancing a political effort. The law has been regularly ignored by members of Trump’s administration, but rarely so ostentatiously as it was in the campaign’s naturalization event.

“Today, America rejoices as we welcome five absolutely incredible new members into our great American family,” he told them in a 10-minute ceremony that had been taped in the afternoon.

It was not the first time Mr. Trump has presided over such a ceremony. But the willingness to use the trappings of presidential power during a campaign convention was a stunning departure from the past, in which prior presidents have avoided seeming to blur the lines between official actions and political activity.

And Mr. Trump’s explicit claim that he loves and appreciates immigrants stands in stark contrast to his record over the past four years, during which he has repeatedly pursued anti-immigrant policies, often fueled by xenophobic language.

Trump wouldn’t rent an apartment to any of these people.

This is un f’n believable. The most anti-immigrant President in history staging a naturalization ceremony in the WH, with military in uniform, FOR A POLITICAL CONVENTION. infuriating.

Dystopian. A racist xenophobe using a naturalization ceremony and the people’s house as a campaign prop. So sickening.

The Hatch Act is a law designed to separate politics from public service. Those lines are being erased tonight.

.@jacobsoboroff notes: There are literally tens if not hundreds of thousands of people who are eligible and awaiting their own naturalization ceremonies and they are being prevented from having them because the Trump admin refuses to hold those ceremonies via zoom.