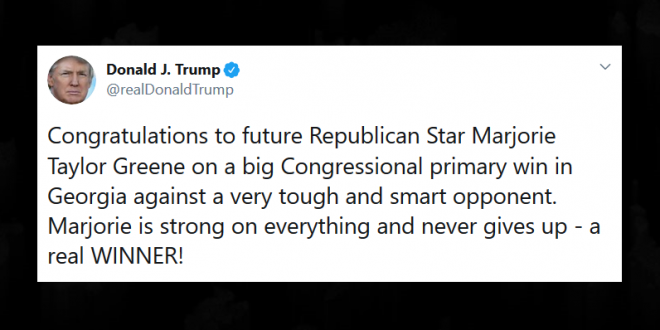 Marjorie Taylor Greene, a businesswoman who has expressed support for the far-right conspiracy theory QAnon and been criticized for a series of racist comments, has won the Republican nomination for Georgia’s 14th Congressional District.

Greene beat neurosurgeon John Cowan in a primary runoff for the open seat on Tuesday in the deep-red district in northwest Georgia, despite several GOP officials denouncing her campaign after videos surfaced in which she expresses racist, anti-Semitic and anti-Muslim views.

“WE WON! Thank you for your support! Save America. Stop Socialism,” Greene tweeted late Tuesday. A video posted to her Twitter account of her victory party showed a room full of supporters gathered closely together. Few, if any, wore face masks to protect against the coronavirus.

Congratulations to future Republican Star Marjorie Taylor Greene on a big Congressional primary win in Georgia against a very tough and smart opponent. Marjorie is strong on everything and never gives up – a real WINNER!

Trump embraces Marjorie Taylor Green, a believer in Qanon, a conspiracy theory that asserts liberal Hollywood actors and Democratic politicians are running an international child sex-trafficking ring and Trump is the only one who can stop them https://t.co/iMuK4xZTLd

Down in the polls, Trump and some of his closest supporters continue to encourage the QAnon movement. The FBI has warned that QAnon & “conspiracy theory-driven extremist movements” are a growing threat. https://t.co/r81mvZyQOo

Trump is saying a QAnon candidate who thinks there’s a ‘deep state’ of child-molesting Satanist traitors and has made racist, anti-Semitic and Islamophobic comments in the past is a “future Republican Star”