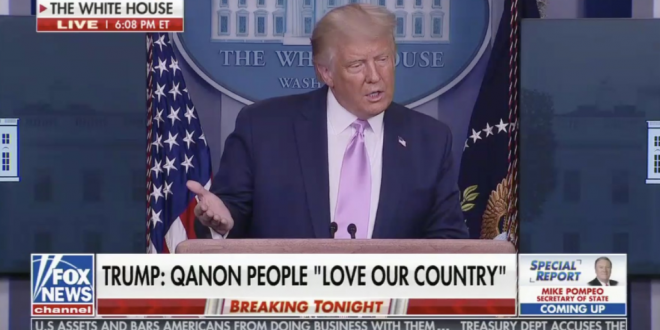 QAnon was once a fringe phenomenon — the kind most people could safely ignore. But in recent months, it’s gone mainstream. Twitter, Facebook and other social networks have been flooded with QAnon-related false information about Covid-19, the Black Lives Matter protests and the 2020 election. QAnon supporters have also been trying to attach themselves to other activist causes, such as the anti-vaccine and anti-child-trafficking movements, in an effort to expand their ranks.

QAnon has also seeped into the offline world, with some believers charged with violent crimes, including one QAnon follower accused of murdering a mafia boss in New York last year and another who was arrested in April and accused of threatening to kill Joseph R. Biden Jr., the presumptive Democratic presidential nominee. The Federal Bureau of Investigation has warned that QAnon poses a potential domestic terror threat.

Trump on the bonkers QAnon conspiracy lie: “I don’t know much about the movement, other than I understand they like me very much, which I appreciate…I have heard that it is gaining in popularity.”

!!! Trump is told that QAnon believes he’s saving the world from a secret satanic cult of cannibals and pedophiles. He says, “Well, I haven’t heard that. But uh, is that supposed to be a bad thing? Or a good thing? If I can help save the world from problems…”

This QAnon answer is a fucking disgrace. It’s a death cult. The FBI identified QAnon as a violent domestic terrorism threat and Trump is pretending not to know what it is while absolutely encouraging them and incentivizing more insane behavior.

Trump seems to now be openly encouraging followers of the QAnon conspiracy. “I don’t know anything about it other than they do supposedly like me.”
Reporter then explains the unhinged theory QAnon and Trump says:
“If I can help save the world from problems, I’m willing to do it.”

I am watching Trump talk about Qanon and how great it is that they love him, and all I can think of right now is that @brithume thinks that the problem is Joe Biden‘s mental condition.

REPORTER: QAnon believes you are secretly saving the world from this cult of pedophiles and cannibals. Are you behind that?

TRUMP: Is that supposed to be a bad thing? We are actually. We are saving the world. pic.twitter.com/rPYFU1B8WB