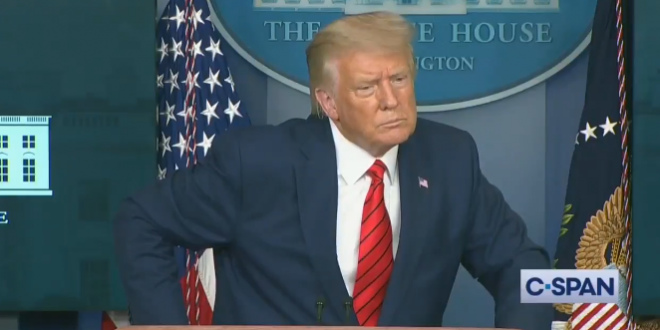 Trump Defends Kenosha Killer: He Was Trying To Get Away, He Fell And They “Very Violently Attacked Him”

President Trump on Monday declined to denounce suspected vigilante shooter Kyle Rittenhouse, the 17-year-old who has been arrested and accused of killing two people during the protests in Wisconsin. Instead, the president said at a news conference Monday that Rittenhouse “probably would have been killed” if he didn’t fire his gun. Rittenhouse, who is also alleged to be a supporter of the president, is awaiting murder charges.

“We’re looking at all of it,” Mr. Trump said, when he was asked by a reporter if he would condemn the violence allegedly caused by Rittenhouse. “That was an interesting situation. You saw the same tape as I saw. He was trying to get away from them, I guess, looks like. And he fell and then they very violently attacked him. And it was something that we’re looking at right now, and it’s under investigation, but I guess he was in very big trouble. He probably would have been killed. It’s under investigation.”

President Trump is now saying Kyle Rittenhouse might have been killed if he didn’t shoot three people — killing two. He said the Trump administration is looking at the case.

That was quite a statement.

Some will no doubt see that as Trump justifying Rittenhouse’s actions.

Trump defends Kyle Rittenhouse, the 17-year-old supporter of his who is charged with murdering two protesters in Kenosha pic.twitter.com/KdfkdTPRVG

REPORTER: Do you want to take this opportunity to condemn your supporters who were shooting paintball guns in Portland?

Trump is barely trying to conceal that he’d like to criminalize protest pic.twitter.com/YWzZyxWJ9T

Trump claims without evidence that left-wing protesters have “killed a lot of people” pic.twitter.com/Avi4Ue8ktO

Trump’s rant about antifa is uncut lunacy. If this guy wins another term this country will be beyond salvaging, if it isn’t already. pic.twitter.com/yS0N7Zv6ez

The president calls it a “peaceful protest” when his supporters shoot people with paintball guns, but calls protestors “anarchists” who deserve 10 years in prison for throwing paint on a statue. pic.twitter.com/idieAJQXfY