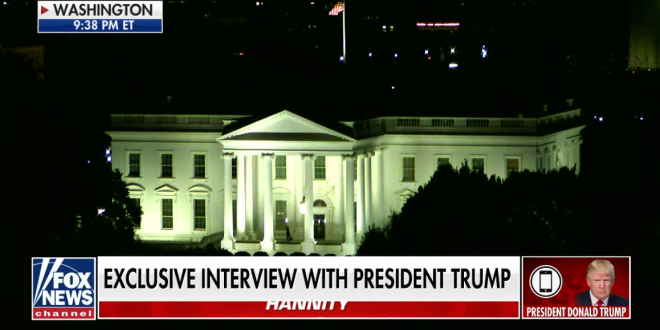 Trump Calls Into Hannity And Mourns “All The Birds” Killed By Windmills, Says Nothing About COVID Deaths

While the president spent part of his interview with pro-Trump Fox News host Sean Hannity discussing the apparent bird-killing qualities of windmills, he found no time to say anything about the nearly 165,000 Americans who have died from coronavirus.

Portraying Harris as “against petroleum,” the president first claimed that meant Biden would be unable to win Pennsylvania and “many other states” before quickly sidetracking himself over the topic of wind power.

“Wind is nice. It’s nice. But it causes tremendous environmental problems,” Trump exclaimed, touching on a subject he’s rambled nonsensically about countless times. “Site and home values going way down,” he added. “If you see a windmill and hear a windmill, your home is worth half or less than half. It kills all the birds.”

Trump: Wind is nice… but it causes tremendous environmental problems… If you see a windmill and you hear a windmill, your home is worth half pic.twitter.com/5zY18eLRnf

Lmao, trump is so much out of his fucking mind he was talking about windmills on Hannity tonight.