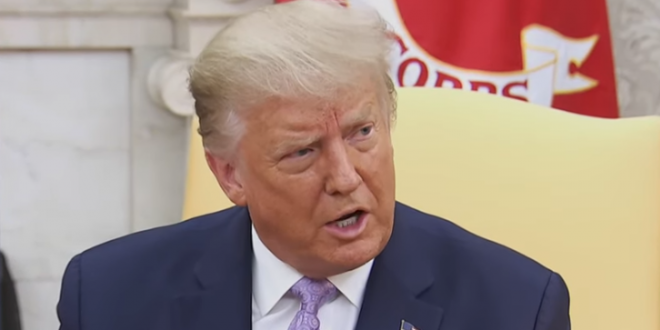 Donald Trump on Thursday tore into Kamala Harris and other Democrats, saying the presumptive vice presidential nominee is a “mad woman” and claiming her party wants to get rid of “any kind of animals” and tear down New York’s famed Empire State Building.

The president, trailing Joe Biden in nationally polls and ones in most key swing states, contended in a Fox Business interview that Democrats want to rip down the iconic building and replace it with a new one featuring “no windows.”

He also said the party’s “Green New Deal” calls for “no cows,” before making his claim that all Democrats want to abolish all animals.

Trump has not landed on a Harris attack strategy. This morning he broke out “a sort of a madwoman, I call her,” which ………. pic.twitter.com/qSAl34t4OV

So far this morning, Trump has called
– Kamala Harris “a mad woman,” “angry” and “condescending”
– Mika Brzezinski a “ditzy airhead”
– Alexandria Ocasio-Cortez “not even a smart person”

#Trump on #Biden winning: “…no fossil fuels, which means, basically, no energy”

..cities would need to be rebuilt “because too much light gets through the windows… “no airplanes”

Previous Forbes: Kushner Is Telling Kanye West He Could Win
Next AMC Theaters To Begin Staggered Opening Next Week