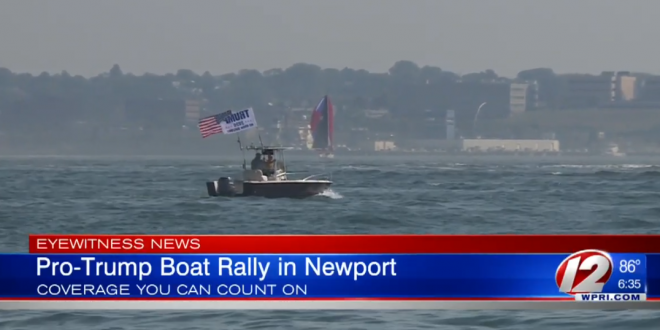 A flotilla of about a hundred boats paraded across Narragansett Bay on Sunday afternoon in a rally supporting President Donald Trump. Roughly two thousand onlookers cheered from the shore. The event, which was organized on Facebook, was called “Trump Boat Rally in RI Lets turn the Bay RED!!!” Along the route, some boaters tossed chum bait into the water to turn the waves around them a literal crimson hue.

But several park rangers said behind the scenes they were unprepared for hostilities they faced from some attendees, who were largely not wearing face masks. One attendee — who carried a handgun on his waist, in violation of state park rules — allegedly accosted another guest for wearing a mask. Another park-goer, who had a rainbow pride pin on their bag, was called a homophobic slur. Some attendees also threatened to tip over a park ranger’s truck.

Previous Bakker Warns Of “Revolution” If Trump Loses [VIDEO]
Next Pastor Performs Faith-Healing Over Zoom: I Brought Two People Out Of Comas “Right In The Zoom Room”