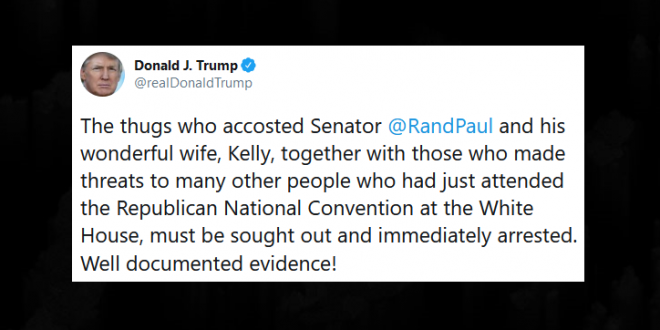 Trump: Arrest The “Thugs” Who Shouted At Rand Paul

President Donald Trump says the angry protesters who confronted and threatened Senator Rand Paul and his wife in Washington must be arrested as soon as possible.

On Friday, Rand Paul said that police in the capital of Washington saved his life when angry protesters confronted him and his wife as they left President Donald Trump’s speech accepting the Republican Party’s presidential nomination.

Paul warned that mob rule featuring similar attacks would become a permanent feature on city streets throughout the US if former Vice President Joe Biden wins the presidency.

The thugs who accosted Senator @RandPaul and his wonderful wife, Kelly, together with those who made threats to many other people who had just attended the Republican National Convention at the White House, must be sought out and immediately arrested. Well documented evidence!

The choice is between America or this. pic.twitter.com/AFa8sHMAlu

Rand Paul is a snowflake who can’t handle being shouted at. cry me a river

You told your followers to “knock the crap out of” people and you’d pay the legal fees.

Wow. The President of the United States is calling for the immediate arrest of peaceful protestors who yelled at a US Senator without even physically touching him. This is pure fascism and should scare every single American that our country has come to this. It is a disgrace.

Yet you’ve said nothing about this white supremacist, Trump idolizing THUG!

You’ve said nothing about it, you racist, disgusting, hypocritical, gaslighting, klansman. https://t.co/VGAGJBqeZO pic.twitter.com/mftavS6Sqf

It is still legal to yell at people in US, including high-level sycophants of the Trump Family Party: safe to assume it won’t be if they carry this next election.