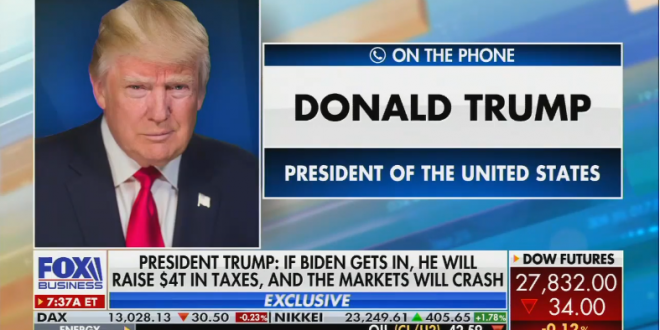 “Those are just two items. But if they don’t get those two items, that means you can’t have universal mail-in voting because they’re not equipped to have it,” Trump said. He claimed the 2020 election could lead to “the greatest fraud in history.”

Trump saying clearly on Fox why he won’t fund USPS. “Now they need that money in order to make the post office work so it can take all of these millions and millions of ballots…But if they don’t get those two items that means you can’t have universal mail-in voting…”

This morning Trump openly admitted that he’s sabotaging the USPS in order to prevent Americans from voting. This is NOT OK. Everyone in America needs to hear this video now! Please make sure it goes viral! pic.twitter.com/cRgvTPGNnd

If we don’t step up to save @USPS, 600,000 hard working Americans will lose their jobs—and millions of Americans will lose access to a vital lifeline that delivers essential goods like paychecks and medicines. We must do everything in our power to save the post office from Trump.

BREAKING: WATCH! #TRUMPkillsUSPS #VoterFRAUD TRUMP is Rigging the Election and put his Donor in charge of the USPS right before Election!🤬 pic.twitter.com/FBAG1z1iEu

Trump is deliberately sabotaging the USPS to prevent YOU (and every other American) from safely voting by mail. He thinks that he can make mail delivery so disjointed that the election results will be in doubt. We all need to fight for the Postal Service and our democracy!

Previous Trump To GOP Senators: Love Me Publicly Or You’ll Lose
Next Erick Erickson: Homosexuality Is “The Product Of Sin”