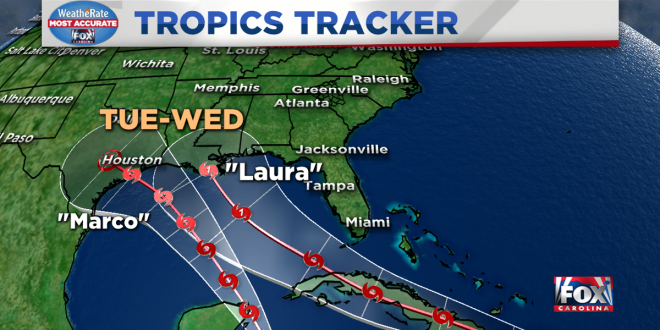 Two tropical storms — Laura and Marco — are lumbering towards the U.S., anticipated to make landfall in the coming week at or near hurricane strength. Both storms could swirl through the Gulf of Mexico simultaneously, a rare meteorological display that could prove a challenge to local residents and strain resources and government agencies in the ongoing pandemic. Laura is of particular concern, as it could become a more significant hurricane, tapping into the bathlike warmth of the Gulf of Mexico.

While exactly where these storms make landfall is still coming into focus, Laura is projected to be near the coast of Louisiana Wednesday while Marco approaches the Texas coast Tuesday. Both systems will converge on the Gulf by late this weekend into early next week, crowding the ocean basin in a feat that’s only been recorded twice before. The storms’ anticipated proximities complicate their forecasts, though at least one of them is likely to become a hurricane over the toasty gulf waters.

Previous Liberty U Asks God To Decide On Shitcanning Falwell
Next McSally: “Fast A Meal” So You Can Give Me The Money