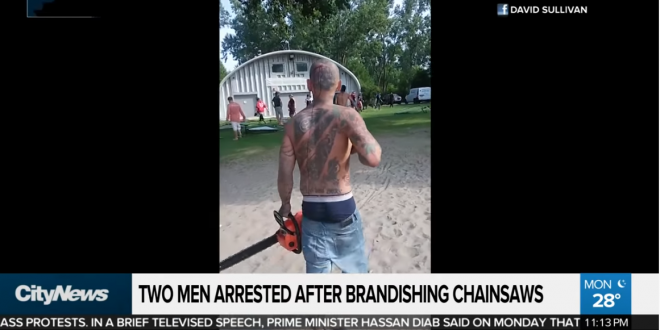 The story of how two blood-covered, chainsaw-wielding men came to terrorize the public at Toronto’s Cherry Beach on Sunday morning just keeps on getting weirder as witnesses come forward with additional details. Members of the anti-lockdown group MAD (Mothers Against Distancing) say that the two men wielding chainsaws destroyed roughly $4,000 worth of DJ equipment that had been set up on the beach for a late-night protest afterparty.

Prominent anti-mask advocate Chris Sky, whose real name is Chris Saccoccia, spoke to Rebel News about the incident in a video published to YouTube Tuesday night. Sky says that the event’s DJ came back after the initial fray (which Toronto Police described as a “physical altercation” involving a “large group of people”) to pack up his gear and help clean. “Like any sane person would do, he kept his distance between him and them and they literally went and cut all his equipment right in half.”

Police confirmed that they were called to Unwin Avenue and Cherry Beach Street area on Sunday morning just before 10 a.m. for reports of a large fight. It is alleged that two men involved in the original altercation suffered injuries. They then left and returned with weapons,” police told CityNews in a statement.

A second video shows the two being arrested by police and being told they will get medical attention. Both are facing charges.

Police only confirmed that “weapons” were seized but did not specify the kind of weapons. Police also have not released their names or what charges may have been laid at this point, citing the need to protect the ongoing investigation

The second clip below is from Canada’s version of Infowars.

So the two blood-covered shirtless guys wielding chainsaws on Cherry Beach were doing so in order to destroy DJ equipment from the aftermath of a massive late-night anti-lockdown/anti-mask beach party. Yay? Oh 2020… you are really not letting up at all!https://t.co/rj0vuR0ro6

Can 2020 get any more bizarre? This looks like it came from a low budget horror film; not #CherryBeach, #Toronto. This has been the most fucked up year I’ve ever experienced in my 53 years of being alive on this planet. #SMH https://t.co/R07HsVkmJ6

Look, there was a fight, and there were chainsaws, but there was not a chainsaw fighthttps://t.co/rVFCxeV9Ns