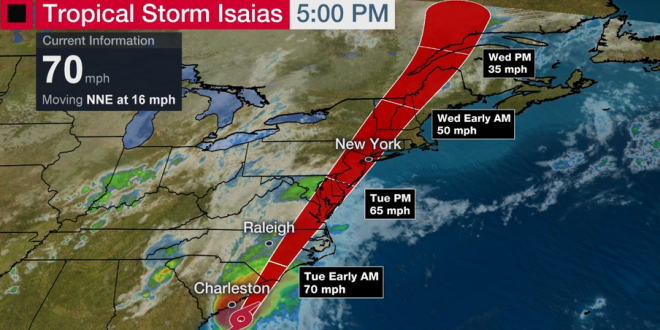 Tonight: Isaias Forecast To Hit Carolinas At Cat One

Isaias is forecast to make landfall as a hurricane in the Carolinas on Monday night and will bring dangerous storm surge and flash flooding to most of the Eastern Seaboard over the next few days, the National Weather Service said.

“We are forecasting it to become a hurricane before it reaches the coast this evening,” senior hurricane specialist Daniel Brown said. “It’s forecast to produce a dangerous storm surge of 3 to 5 feet in portions of North and South Carolina.”

Ferry operators wrapped up evacuations from Ocracoke Island in North Carolina’s Outer Banks on Monday, moving more than 3,500 people and 1,700 vehicles off the island over four days.

Island officials were taking no chances after taking a beating less than a year ago from Hurricane Dorian. Evacuation orders also have been issued for Hatteras Island north of Okracoke.

The five boroughs are under a tropical storm warning, which means that conditions for a storm within the next 36 hours are imminent. Sustained winds of between 39 and 74 mph and strong gusts are forecast as Isaias approaches New York City, escalating the threat of downed power lines and trees.

Already, the city’s Emergency Management department has installed temporary reinforcements — such as sandbags and inflatable berms — in low-lying South Street Seaport to guard against potential flooding. Other measures are also being implemented to guard against flooding in low-lying spots.

Previous Scamvangelical To Hold In-Person Event For 2500
Next Trump Appointee Fired After Anti-LGBTQ Rants, Vow To Hold Press Conference With Jacob Wohl And His Crony