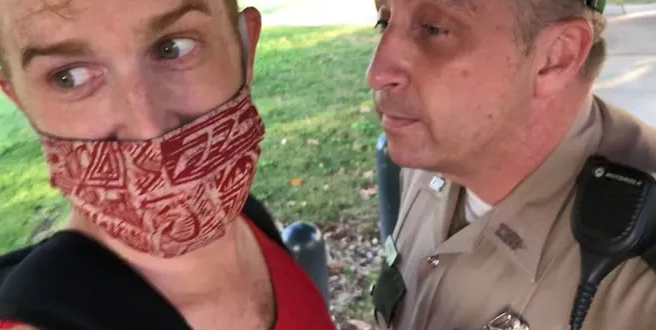 A Tennessee Highway Patrol trooper accused of ripping a face mask off a bystander filming a traffic stop has been terminated. A THP spokesman confirmed Trooper Harvey Briggs’ termination Friday evening after an internal investigation by the Tennessee Department of Safety and Homeland Security. Briggs was found to have violated a department policy and was terminated for unprofessional conduct.

The firing comes after Briggs, a 22-year employee of the agency, was placed on leave after a video surfaced of an altercation with a bystander. A video posted by Andrew Golden shows him filming a traffic stop by troopers at the Capitol Monday evening. Briggs got inches away from Golden’s face while not wearing a mask, the video shows. While the camera wasn’t on Briggs, Golden said, Briggs ripped the mask from his face.

Previous NYPD Union Endorses Trump, He Tells Them They “Gotta Be Able To Fight Back” During Protests [VIDEO]
Next Trump Claims His DC Hotel Is No Longer For Sale