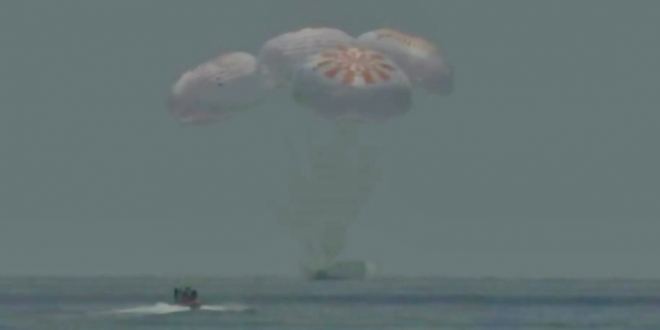 Crew Dragon astronauts Douglas Hurley and Robert Behnken enjoyed wakeup messages from their young sons early Sunday before readying their ship for a fiery plunge back to Earth and splashdown in the Gulf of Mexico near Pensacola to close out a 64-day test flight.

Hurley and Behnken, launched atop a SpaceX Falcon 9 rocket on May 30, undocked from the International Space Station Saturday evening, setting the stage for re-entry and the first water landing by U.S. astronauts in 45 years.

With Hurley and Behnken monitoring an automated return to Earth, the Crew Dragon’s no-longer-needed aft trunk section was jettisoned, exposing the capsule’s heat shield, a few minutes before a planned 11-minute 22-second firing of the spacecraft’s forward thrusters at 1:56 p.m.

“Thanks for flying @SpaceX.”

A 2:48pm ET, @AstroBehnken and @Astro_Doug splashed down, marking the first splashdown of an American crew spacecraft in 45 years. #LaunchAmerica pic.twitter.com/zO3KlNwxU3

Great to have NASA Astronauts return to Earth after very successful two month mission. Thank you to all!

Previous Mnuchin: $600 Unemployment Benefit Is “Overpaying”
Next Texas Gov To Skip GOP Convention Due To COVID