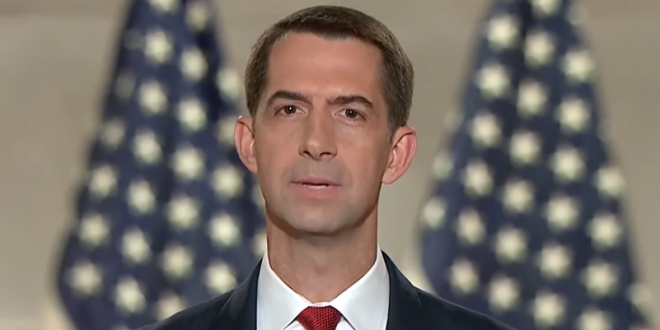 Sen. Tom Cotton delivered a cartoonishly hawkish speech at the RNC Thursday night, just a few minutes before President Trump delivered his acceptance speech, positioning him as a White House favorite in the contest to succeed the current president in 2024.

Far from advocating ending wars, Cotton delivered a sermon in praise of bellicosity, denouncing every foreign policy achievement of the Obama administration as a dangerous expression of weakness and attributing all of it to Joe Biden, who supposedly slashed defense spending, coddled dictators, and encouraged ISIS to rampage through the Middle East.

Most of all, Cotton accused Biden of aiding and abetting China’s rise for 50 years, a policy that has culminated in it “unleash[ing] this plague on the world.” The speech concluded with a peroration about the dangers of weakness and the necessity of achieving and maintaining peace through raw military power.

Wait, Tom Cotton just said America is Safer now than 4 years ago – but one of the themes of this convention is that America’s cities are more violent than ever.

Sen. Tom Cotton — advocating for Trump, who said he and Kim Jong Un “fell in love” — went after Biden for being soft on certain dictators.

Tom Cotton: The smarter, more ruthless Trump that you’d better be worried about now that Trump and Barr have burned down so many of the legal and constitutional guardrails that would protect you from someone like Tom Cotton.

Kyle Rittenhouse is what Tom Cotton and Matt Gaetz are alluding to when they call for “patriots” to defend America from peaceful protesters.

Tom Cotton is an old school neo-con on top of being a fascist and he’s going to run for president in 2024. He is immensely dangerous and sociopathic. #RNC2020

Tom Cotton begins his speech reminding us that we can’t have normal conventions, the result of an administration that failed to take the virus seriously and allowed it to spread uninhibited across the country.