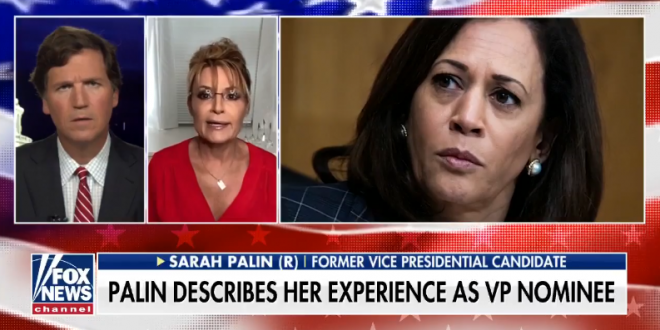 The media treats Democrats as “delicate pieces of china,” while Republicans are largely portrayed as the “bull in a china shop,” former Alaska Gov. Sarah Palin argued Wednesday. In an interview on “Tucker Carlson Tonight,” Palin said she was both “nauseated and just laughing,” from remarks delivered at the Democratic Convention, reflecting a culture that is “just so out of touch with the normal average Americans.”

“Remember, these Democrat candidates, they are treated as delicate pieces of china whereas someone like me, and other kind of hardcore common constitutional conservatives, we’re more like the bull in the china shop,” she argued. “I think that those who are just really, really close philosophically, even with politicians and those in the media, the media is going to treat them with some kid gloves,” Palin added, noting the “complete opposite treatment when it comes to the different philosophies.”

“Looking back, is there anything you could have done to get the kind of coverage that Kamala Harris is getting now?” Carlson asked. “Like you care about equality deep within your soul, that you’re a rockstar, a celebrity, you’re the Dalai Lama reincarnated. Could you have done anything to get that kind of coverage?”

Palin replied, “I would not have prostituted myself in terms of changing any of my positions in order to garner better press.” She went on to suggest that she would “gotten a lot better coverage” had she “compromised my convictions,” seeming to imply that Harris has done that, without providing specific examples.

Palin’s comments come shortly after Carlson used his show to spread a sexist smear against Harris that she used a relationship with an older politician to further her own career.

Sarah is correct. McCain was a lousy candidate with lots of bad policy, but the “deadheads” sabotaged his campaign from the inside, and never gave him a chance to win. Hope they were happy with OBiden, who gave you me! https://t.co/rynLuGRKHA

While discussing the media’s treatment of Kamala Harris, Sarah Palin says she wouldn’t have “prostituted” herself and her positions to get better coverage when she was a VP candidate. pic.twitter.com/uJBjuuyCo9