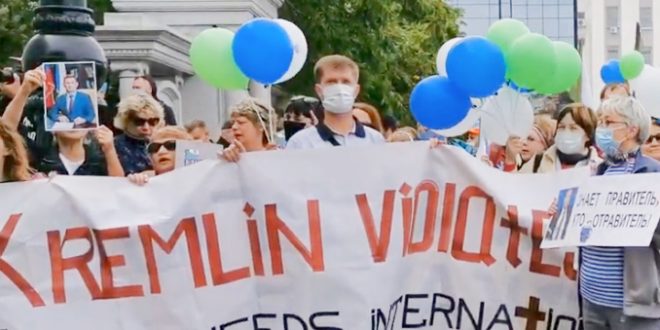 Thousands of people took to the streets on Saturday in Russia’s far eastern city of Khabarovsk to protest against President Vladimir Putin’s handling of a regional political crisis and the suspected poisoning of his most vocal critic.

“Putin, have some tea,” protesters chanted as they marched on the city’s main thoroughfare, in a reference to the case of opposition politician Alexei Navalny who fell gravely ill this month after drinking a cup of tea at an airport cafe.

Residents of Khabarovsk, about 6,110 km (3,800 miles) east of Moscow, started holding weekly rallies after the July 9 detention of Sergei Furgal, the region’s popular governor, over murder charges he denies.

Previous Leonard Cohen’s Estate May Sue Over RNC’s Use Of His Song Hallelujah: They Asked Us And We Told Them No
Next Trump Rally Cultist Threatens Bomb Attack On Media