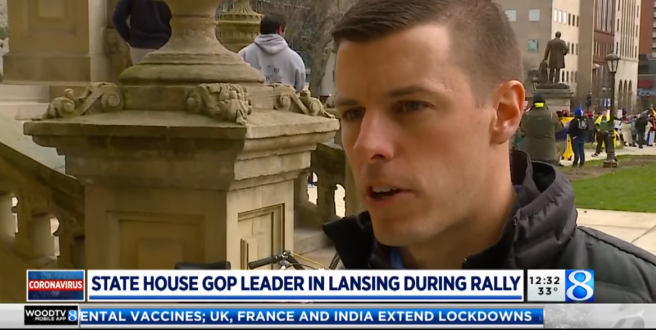 In a 2-1 decision, the Michigan Court of Appeals has upheld Gov. Gretchen Whitmer’s unilateral emergency actions to combat COVID-19, denying a legal challenge brought by the GOP-controlled state Legislature.

The court agreed with a state Court of Claims judge in finding the 1945 Emergency Powers of the Governor Act gives Whitmer the ability to declare emergencies and take actions in response without lawmakers’ approval. The court also ruled Friday that the law itself doesn’t violate the separation of powers in government.

The high stakes, historic case is expected to end up before the Michigan Supreme Court. The state’s high court is scheduled to hear arguments on a similar question on Sept. 2. And House Speaker Lee Chatfield, R-Levering, tweeted in response to the appeals court ruling, “We will now go to the MSC.”

In the April photo above, Chatfield is attending the anti-Whitmer rally during which heavily armed militia members stormed the Michigan statehouse.