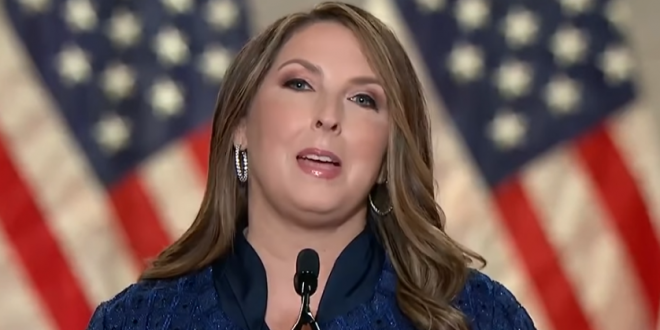 “Well, I’m actually a real housewife and a mom from Michigan with two wonderful kids in public school who happens to be the only — only the second woman in 164 years to run the Republican Party.”

The anti-Hollywood message is one that McDaniel has been making in TV interviews over the past several days, promising that Trump’s convention was “going to be about real people.”

McDaniel must have missed the Hollywood-style video package that opened the RNC on Monday night—with dramatic voiceover by four-time Oscar nominee and one-time winner Jon Voight, who is also the father of Angelina Jolie.

“We all know that it is easy to criticize. It takes a true leader to solve problems,” Voight told viewers in the video. “COVID-19. While others criticized without solutions, President Trump’s swift action saved lives, and as leading Democrats want to keep businesses closed down, our president is leading a way for a full economic recovery.”

.@EvaLongoria’s an entrepreneur, a working mom and wife, like many of us balancing career and life. She’s the caring sister of a special needs person. She’s an activist who raises her voice for just causes. Unlike you, she fights racism, separation of families & sexual harassers. https://t.co/actTuZKQH8

Ronna McDaniel… not a good look talking about @EvaLongoria with smart ass comments trying to be all cute. I advice you to do your homework about Eva before reading nonsense from a teleprompter. It’s embarrrasing. You as a “housewife” should know that.

Ronna Romney McDaniel is just an ordinary housewife (and the niece of multi-multi-millionaire Mitt Romney despite dropping her surname) and has a full-time job as head of the RNC. @EvaLongoria is a self-made actress & filmmaker who was not born rich. #RNCConvention2020 #housewife