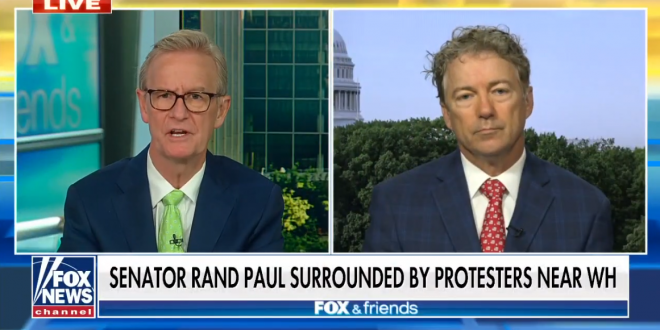 Sen. Rand Paul, R-Ky., told “Fox & Friends” he believes he would have been killed if not for the police when he and his wife were surrounded and attacked by a “mob” yelling threats and pushing police upon exiting the White House after President Trump’s acceptance speech at the Republican National Convention (RNC) Thursday night.

The Pauls were unharmed, but the senator is still calling on the FBI to make arrests and conduct an investigation into the “interstate criminal traffic being paid for across state lines” because people have already been killed in other cities.

“I believe there are going to be people who are involved with the attack on us that actually were paid to come here, are not from Washington, D.C., and are sort of paid to be anarchists,” he said. “This is disturbing because really, if you’re inciting a riot that’s a crime, but if you’re paying someone to incite a riot that person needs to go to jail as well.”

Previous Four Attendees Tested COVID+ On First Day Of RNC
Next Liberty Pastor Apologizes To Students For “Shameful” Falwell Scandal: “If It’s Christian, It Ought To Be Better”