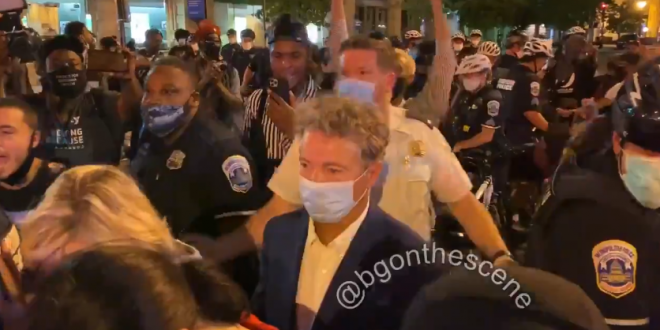 A crowd of protesters surrounded U.S. Sen. Rand Paul as he was leaving the White House following the Republican National Convention early Friday, shouting for the lawmaker from Kentucky to acknowledge the shooting of Breonna Taylor.

Video posted on social media showed dozens of people confronting Paul and his wife, who were flanked by Metro Police, in a Washington street after midnight.

Protesters could be heard shouting “No Justice No Peace” and “Say Her Name” before one appears to briefly clash with an officer, pushing him and his bike backward, sending the officer into Paul’s shoulder.

As Trump and others spoke, protesters marched outside the gates, honking horns and chanting slogans. Noise drifted over to the South Lawn and could occasionally be heard on the RNC’s television broadcast, but the event continued uninterrupted.

Protests against police brutality and racial inequality have intensified this week after a police officer in the southeastern Wisconsin city of Kenosha shot Jacob Blake, a Black man, seven times in the back. Two protesters were killed and a third was injured in a subsequent shooting nights later.

The mob has surrounded Senator @RandPaul and his wife as they left the White House
pic.twitter.com/Wm7IojAQTF

Attendees to President Trump’s speech being harassed as they leave the White House
pic.twitter.com/yZK3t337tF

Just got attacked by an angry mob of over 100, one block away from the White House. Thank you to @DCPoliceDept for literally saving our lives from a crazed mob.

RAND PAUL: “It’s become so dangerous for us. And I don’t hear Joe Biden or Kamala Harris saying one thing about the violence. This mob is their voters. This is the new Democratic Party. And if we don’t resist this, the United States is going to become Portland.” – FOX NEWS

.@RandPaul ‘There’s something going on…there’s interstate criminal traffic being paid for across state lines…At least some of the people who attacked us were not from DC. They flew here in a plane, they’ve got fresh new clothes & were paid to be here.’https://t.co/RLJmCjAcyc pic.twitter.com/gEthwekDnq

On Fox & Friends, Sen. Rand Paul says — with no evidence — that he believes the protesters who surrounded him were outside agitators "hired" and "paid" to attack him and "be anarchists." pic.twitter.com/pBQYtZL13N