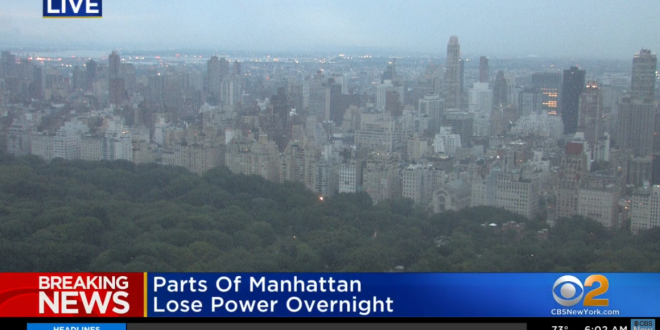 A massive power outage struck Friday morning in the upper part of Manhattan, knocking out not only lights but also cellphone service, and a short time later power went out in a large chunk of Queens as well.

At one point it was pitch black as far as the eye could see along Broadway north of 73rd Street on both the east and west sides of Manhattan.

“We are investigating a problem on our transmission system that caused three networks in Manhattan to lose their electric supply at about 5:13 this morning. The supply has been restored to those networks on the Upper West Side, Harlem and the Upper East Side,” Con Ed said in a statement.

The outage lasted for less than an hour but still left tens of thousands of Con Edison customers without electricity, furthering worries about the integrity of the region’s power grid that were raised by the damage caused by Tropical Storm Isaias earlier this week.

The outages have exacerbated the distress brought by the coronavirus pandemic. Many in the region who have been forced to remain at home are now without the phone or internet service required to work remotely, or air-conditioning that can bring relief in a humid New York summer.

Who had #NYC #blackout on their 2020 bingo card? pic.twitter.com/G1jv6wmbg5