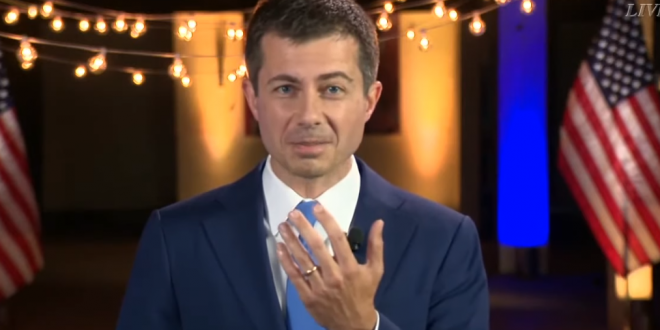 Former South Bend Mayor Pete Buttigieg, pointing to his own experience as an openly gay Afghanistan war veteran and presidential candidate, touted Democratic nominee Joe Biden Thursday night as someone who would help more Americans feel like they “belong.”

Underscoring that theme of belonging, Buttigieg addressed the virtual Democratic National Convention from LangLab, the South Bend warehouse-turned-arts center on High Street where he and his husband, Chasten, celebrated their wedding reception in June 2018.

“Just over ten years ago, I joined a military where firing me because of who I am wasn’t just possible — it was policy,” Buttigieg said. Looking at his hand, he then alluded to his personal life. “The very ring on my finger — a wedding we celebrated here where I’m standing — reflects how this country can change,” he said.

During his DNC speech, Pete Buttigieg pointed to the progress on gay rights during his 38-year lifetime as reason to be optimistic that the change needed to create an “America where everyone belongs” remains possible https://t.co/ififzCt00Y

In his DNC address, Pete Buttigieg leans into the theme of belonging, a big part of his presidential primary stump speech.

And based on his placement in the program, it’s clear he’ll likely play a role if there’s a Biden administration, says @ec_schneiderhttps://t.co/ttDbCRgjs1