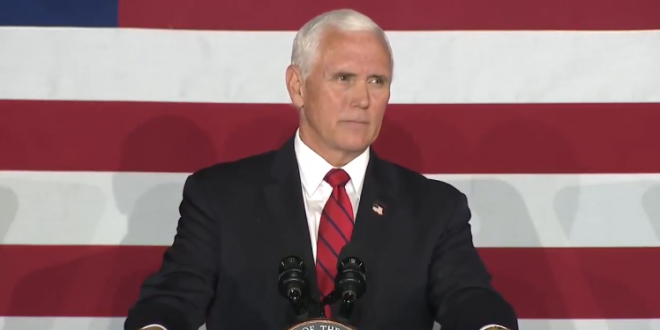 “Joe Biden and Kamala Harris would bury the economy under an avalanche of red tape: more regulation and more bureaucracy.

“In fact, the California senator that he named as his running mate this week said during her short campaign for president that Americans needed to be, and I quote, ‘educated about the effect of our eating habits on our environment’.

“Senator Harris said that she would change the dietary guidelines of this country to reduce the amount of red meat Americans can eat.

The man has some seriously weird fantasies, doesn’t he?

It’s about time Mike Pence professed his love for meat.

“Well I’ve got some red meat for ya…”

Can’t make it up… pic.twitter.com/MeNnZmEsCx

“When I heard him talking about the beef industry and America’s meat, I said, Mr. Michael Pence, you’re a rogue and a rapscallion with a mouth like a silver-tongued sailor in a t-shirt and dungarees, smelling like Old Spice and temptation. Tell me more” pic.twitter.com/fUvP2IWwZW

Previous Obama: Trump Is Trying To Kneecap The Postal Service
Next GOP/QAnon US Senate Nominee: Masks And Social Distancing Are A Plot To Turn Us Into Zombies [VIDEO]