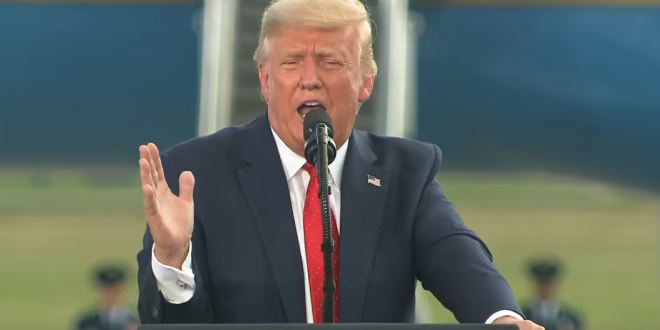 Ohio In Uproar After Trump’s Call To Boycott Goodyear

President Donald Trump shook things up in Northeast Ohio on Wednesday by calling for a boycott of Goodyear tires after the company reportedly told employees they couldn’t wear “Make America Great Again” or “Blue Lives Matter” attire. It didn’t take long for leaders in Akron and across the state to respond.

Trump’s call to boycott comes after a Goodyear employee told a TV station that the company’s zero-tolerance policy was “discriminatory.” The worker claimed the photo was taken during a “diversity training,” but Goodyear said Wednesday that wasn’t true.

Goodyear has believed in this community for generations, investing in the power, tenacity and honest people of the heartland, which is more than we can say for this president. #WeStandWithGoodyear pic.twitter.com/0bM8Xax018

It’s absolutely despicable that the President would call for a boycott of an American company, based in Akron, that employs thousands of U.S. workers. https://t.co/0wI5CT1zjG

Keep in mind, this is a President who spent years making his own Trump-branded products overseas.

He failed to stand up for workers in Lordstown, and now he betrays the workers in Akron.

Goodyear is a 121-year old company that was founded in Akron, Ohio, and has never left its home, opening a new global headquarters building in Akron in 2013. It employs tens of thousands of Americans. And the President is leading a boycott of it. https://t.co/7dpAtSCdGD

Goodyear empliyees have been contacting me all day and they are enraged. I do not understand trying to cripple an American manufacturer. Ohio lost 6500 manufacturing jobs this year and Maxion is leaving too. https://t.co/QICvrrwd35

You hear that, Ohio employees of Goodyear? Suck it up, you’ll find jobs https://t.co/ZW6YBK6J4H

Who wants to tell him. pic.twitter.com/cMrvwxbpm1