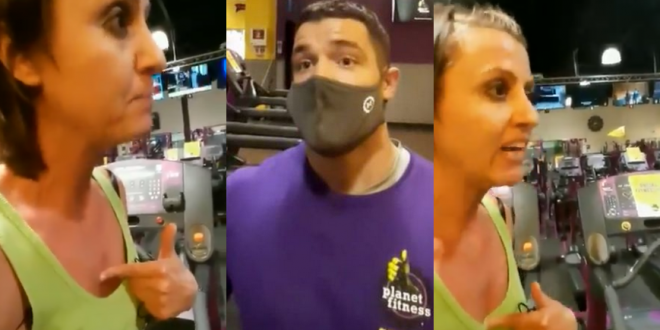 After a fight over wearing a mask at a DMV went viral earlier in the week, a local Ohio “Karen” is back at it again — this time at Planet Fitness.

Anna Peric feels extremely passionately about masks and wants to world to know it. She was filmed berating a Planet Fitness manager because she has limited time to exercise, dammit, and she does not believe she needs to wear a mask whilst doing so. When the staffer asked Peric to put a mask on while she was on the treadmill, Peric went off, accusing him of harassment.

The most annoying woman in America, #AnnaPeric, goes to Planet Fitness to infect everyone with her bullshit pic.twitter.com/HIOrzOpB51

#AnnaPeric making this woman famous is what she wants, she puts people’s lives in danger by going into post offices without wearing a mask and acting stupid. Tell her what you think by going to FacebookAccount Anna E. Peric pic.twitter.com/csLGMlVRZh

Previous Nazi Party Applications Handed Out In Indiana Park
Next McDaniel: If Biden Can Live In His Basement, Trump Can Accept GOP Nom At His House, The White House