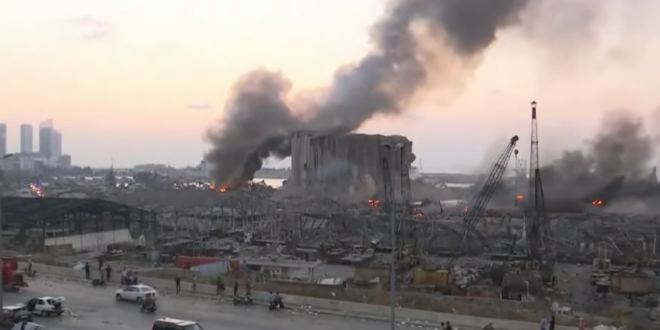 A large blast in the Lebanese capital, Beirut, has killed at least 50 people and injured more than 2,700 others, the health minister says. It is not yet clear what caused the explosion. Videos show smoke billowing from a fire before the blast, which is followed by a mushroom cloud.

Hospitals are said to be overwhelmed and many buildings have been destroyed. Lebanon’s internal security chief said the blast happened in an area housing highly explosive materials. The interior minister said first reports suggested what he called explosive material stored at the port had blown up.

Prime Minister Hassan Diab called it a catastrophe and said those responsible must be held to account. He spoke of a “dangerous warehouse” which had been there since 2014, but said he would not pre-empt the investigation.

Senior security officials say the explosion in Beirut may be linked to “highly explosive” confiscated materials being stored in a warehouse.

The PM declared Wednesday a day of mourning, and hospitals are seeking blood donations.

The port of #Beirut before and after today’s devastating explosion. #Lebanon pic.twitter.com/6cUziBEdKz

The total destruction of the #Beirut port will have devastating consequences for years to come. 80% of #Lebanon‘s grain supply came through this port into the country. The entire country is depended on this port for import pic.twitter.com/1euvx9j5P8