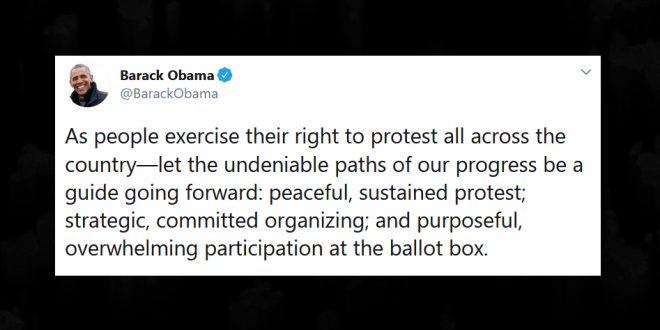 Former President Obama on Friday called for “peaceful, sustained” demonstrations for racial justice as the police shooting of Jacob Blake in Kenosha, Wis., has ignited a new round of protests and demands for reform across the nation.

The tweet came as thousands of people congregated in Washington, D.C., in a march against police brutality and systemic racism held on the anniversary of Martin Luther King Jr.’s “I Have a Dream” speech.

Kenosha has become a new epicenter of unrest after Blake, a Black man, was shot seven times in the back in front of his children on Sunday. Blake remains hospitalized, and his family has said he is at least temporarily paralyzed.

As people exercise their right to protest all across the country––let the undeniable paths of our progress be a guide going forward: peaceful, sustained protest; strategic, committed organizing; and purposeful, overwhelming participation at the ballot box.

If you’re looking to take action—or looking to educate yourselves on these issues—we’ve gathered some resources from the @ObamaFoundation that can help at https://t.co/V7b0mJoZiL.

Previous Extradition Delayed At Least One Month For WI Killer
Next Evangelicals: RNC Protesters Shouted Blasphemy At Us