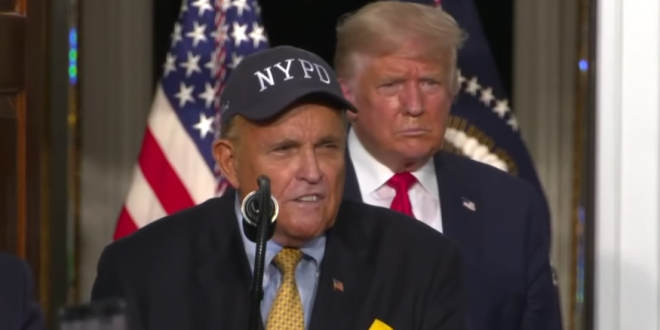 NYPD Union Endorses Trump, He Tells Them They “Gotta Be Able To Fight Back” During Protests [VIDEO]

Seeking to amplify his law-and-order message, President Donald Trump on Friday told hundreds of New York Police Department officers that “no one will be safe in Biden’s America” if the former Democratic vice president defeats him in November .

“This guy has been taking your dignity away and your respect,”″ Trump said of former Vice President Joe Biden. “And I’m telling you on Nov. 3 you’re going to be getting it back.”

Trump spoke to members of the City of New York Police Benevolent Association, the union representing some 24,000 rank-and-file officers as he steps up his attacks on Biden and his running mate, Sen. Kamala Harris.

Trump held a mini-rally outside of his Bedminster, New Jersey golf property on Friday evening, where he encouraged the group of New York City Police Benevolent Association members in attendance to “fight back” when dealing with unruly protesters.

Three years ago, when addressing a gathering of law enforcement officers on Long Island, Trump famously told them “Don’t be too nice” when arresting members of the MS-13 gang.

Tonight at Bedminster. Not a rally but it has that feel on a much smaller scale. Trump hats being passed out. Mask wearing is hit and miss. Outdoors but an estimated 300 in attendance in close quarters. Watch: pic.twitter.com/cUb48tba6b

Trump thanks New York police officers are this event with their Union NYCPBA. This is outside his N.J. private club. pic.twitter.com/CND6UZibTd

NYPD union endorsed Trump. I’m sure this is part of their neighborhood outreach plan.

Also, does anyone else see a potential problem with police unions – enforcement arms of the state with lethal weapons – promoting “preferred” candidates for office or is that just me? https://t.co/UlmigAuedh

It seems that if the #NYPD wants to combat the idea that minorities have no cause to fear unequal treatment at the hands of the police, maybe endorsing an overt racist and supporter of police brutality is not the best way to do it. #PoliceBrutality https://t.co/RVVqPFMDIX

The city is nearly 70% Hispanic, Black, Asian or mixed race.

And the NYCPBA brought a group of mostly white NYPD cops to New Jersey to endorse a man who lied about the Central Park Five and lied about the first Black president. https://t.co/VOmWsRkmi4