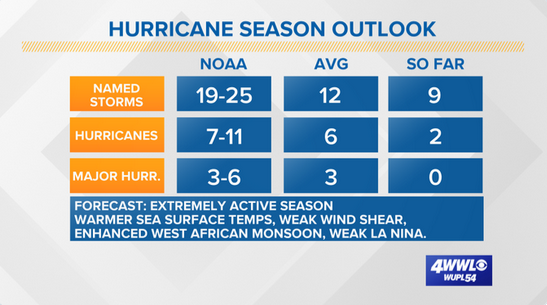 The storms will keep rolling in. Forecasters from the federal government said Thursday that an “extremely active” hurricane season was likely for the Atlantic Basin, with as many as 25 named storms forming.

This includes the nine named storms that have already formed: Arthur, Bertha, Cristobal, Dolly, Edouard, Fay, Gonzalo, Hanna and Isaias. “This is one of the most active seasonal forecasts that NOAA has produced in its 22-year history of hurricane outlooks,” said U.S. Secretary of Commerce Wilbur Ross in a statement.

Overall, the National Oceanic and Atmospheric Administration said 19 to 25 named storms will develop, of which seven to 11 will be hurricanes. Storms become hurricanes when their winds reach 74 mph.

NOAA just issued their revised forecast for the Atlantic hurricane season. They’re now calling for one of the busiest seasons on record. 19-25 total named storms, 7 to 11 are expected to become hurricanes including 3 to 6 majors. Yikes. https://t.co/5MhheGe2Qf

NOAA has updated their projections for the 2020 Atlantic Hurricane Season. They are now calling for 19-25 named storms. We only use 21 of the letters (no Q,U,X,Y or Z names) so if we get a 22nd named storm this year, we move to the Greek alphabet and start with ‘Alpha’ pic.twitter.com/lvrLll9uHZ