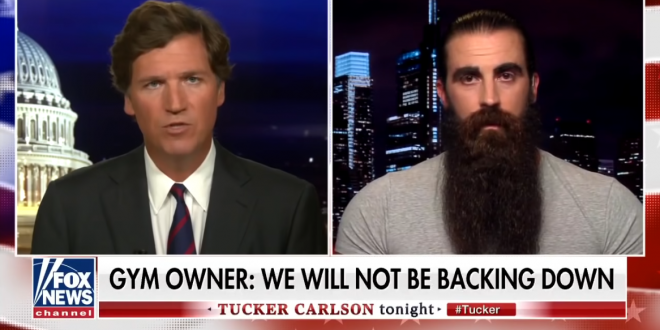 A borough council in Camden County voted Tuesday to rescind the business license of a gym that has repeatedly defied a state order to close its doors under coronavirus restrictions.

The Bellmawr council voted 5 to 1 to rescind the mercantile license of Atilis Gym after an hour-long hearing that featured comments from the gym owners’ attorney, the borough’s lawyer and council members.

One of the gym owners, Ian Smith, sat in the council chamber, along with a half dozen police officers and 10 members of the public allowed to attend in seats spaced 6-feet apart. One of the last times he was inside the Bellmawr municipal complex, earlier this month, he was in handcuffs after being arrested.

A little reported tidbit about the owner:

The New Jersey man who has gotten national attention for opening his Bellmawr gym in defiance of the state’s shutdown orders is now facing some backlash after word circulated online that he also broke the law 13 years ago in an incident that cost a young man his life.

Ian A. Smith was a 20-year-old Stockton University student in 2007 when he drank 10 to 12 beers and in the morning ran a stop sign, killing Kevin Ade, 19, of Galloway Township, according to 6ABC reports at the time. He pleaded guilty to vehicular manslaughter and was sentenced to five and a half years in prison, court records show.

But some members of Ade’s family said that while they hoped Smith would turn his life around, his decision to reopen his gym — despite the governor’s executive order and the risk it poses to members — shows he has not. “It shows he has no regard for the law,” said Robert Henchy, Ade’s uncle.

Two weeks ago the gym owners live-streamed themselves kicking open the boarded up doors to his gym. Last month a New Jersey judge ruled that Gov. Phil Murphy had the authority to order the gym to be closed. In June, far-right extremists and militia members joined a protest outside a gym which was covered live by Fox & Friends, whose producers dispatched host Pete Hegseth to the scene, where he pronounced them to be “patriots.”