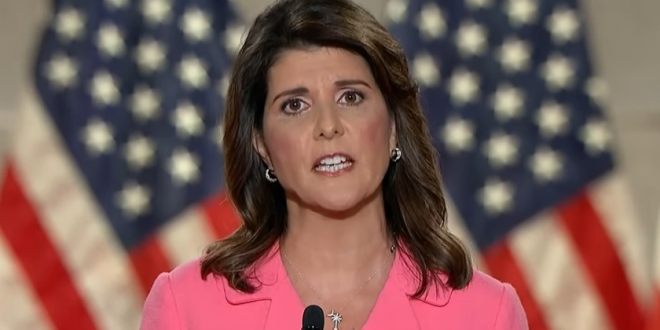 Nikki Haley told the Republican National Convention on Monday night that she and President Trump did what former President Barack Obama and Vice President Joe Biden, the Democratic presidential nominee, failed to do on the world stage.

She also claimed that for many Democrats, it’s “fashionable to say that America is racist” — a statement she considers “a lie.”

“We did what Barack Obama and Joe Biden refused to do,” Haley, who was Trump’s former ambassador to the United Nations, said in a live speech from Washington, D.C. “We stood up for America. And we stood against our enemies.”

Referencing the 2015 shooting of nine Bible study attendees by a white man at a historic Black church in Charleston, Haley noted that South Carolina didn’t erupt into the violence seen after some shootings of Black Americans in other cities.

Haley also took a spin off the Black Lives Matter movement’s terminology, saying that the lives of Black police officers shot in the line of duty, Black small-business owners affected during rioting and “Black kids who’ve been gunned down on the playground – their lives matter, too.”

“A leader’s words matter in these situations. And the president’s words had been hurtful and dangerous,” Haley wrote in her book. “I picked up the phone and called the president.”

Elsewhere, she has sometimes pushed back on his infamously provocative and pugilistic social media style. “This is so unnecessary,” she tweeted back at Trump last year after he posted about a political opponent’s home being burgled.

On Monday, she celebrated Trump’s rhetoric, saying that he “tells the world what it needs to hear” and said, “he knows that political correctness and cancel culture are dangerous and just plain wrong.”

Since Nikki Haley brought up Charleston Church Shooting, might be a good time to remind people that when the young white killer of nine people was arrested the next day, not only did police not shoot him, but they bought him food from Burger King.#Blacklivesmatter

So did I hear that right….Nikki Haley says America is not racist and then describes how she experienced racism herself?