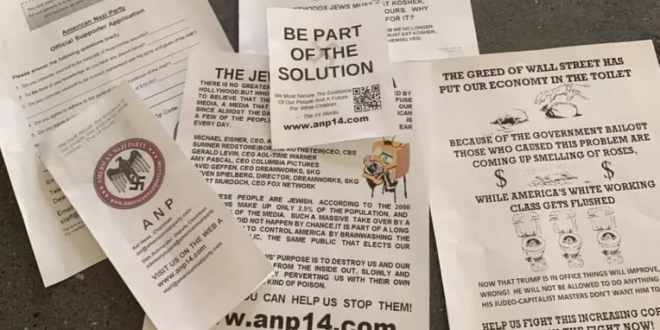 Nazi political party applications were being handed out by men wearing Nazi flag armbands in Indiana this weekend, according to a viral post on Twitter.

Twitter user @GoldvesterCos shared a picture of the two men on Saturday, saying they were handing out anti-Semitic pamphlets and “Nazi political party” applications in Henryville, Indiana, a small town around 20 miles north of Louisville.

The picture shows the men, dressed in white shirts with armbands bearing the Nazi flag, standing by a table covered with papers.

Nazis in Henryville, Indiana today. (Near Louisville KY) Handing out anti-Semitic pamphlets and ‘nazi political party’ applications. The woman was there too and apparently one of them is a marine. I’m so disgusted these people live here pic.twitter.com/g9N42kqhzi

JCRC is appalled but not surprised to learn that applications to join the nazi party were being distributed in Henryville, Indiana. Antisemitism forms the core of white supremacy and white nationalism. 1/2 https://t.co/6larQOCXY0