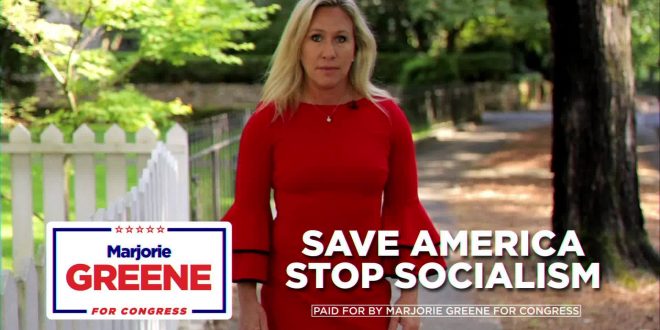 National Review: Give That QAnon Nutbag The Steve King Treatment And Deny Her Committee Assignments

From the editorial board of the National Review:

Party leaders can’t stop Greene from being elected in a district that routinely backs Republicans over Democrats by a 3-1 margin, but congressional Republicans would be wise to follow the lead of Illinois Republican Adam Kinzinger in repudiating Greene. House Republicans should go further and deny Greene committee assignments when she arrives in Congress in January.

Stripping Iowa Republican Steve King of his committee seats in 2019 sent a message that there are boundaries of decency in the GOP that should not be crossed, and it signaled to GOP primary voters in Iowa that they should choose more wisely next time they had an opportunity. Thankfully, Iowans did just that in June. Any such move would surely lead Greene to conclude there is a conspiracy against her, but some paranoids deserve enemies.

In newly-unearthed 2018 video, GOP-backed House candidate Marjorie Taylor Greene claims the Obama administration used MS-13 to assassinate Seth Rich and that JFK Jr.s death was “another one of those Clinton murders.” https://t.co/v1tlpzIA0g