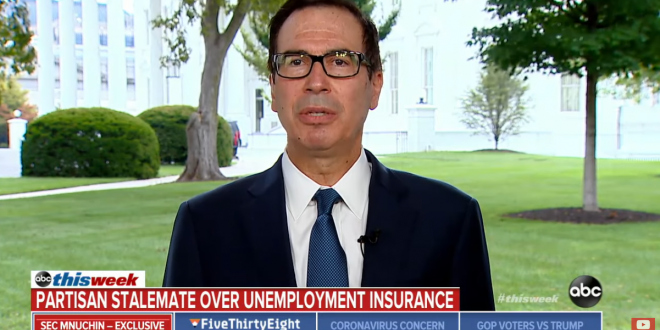 A last-ditch effort was mounted by Senate Republicans Thursday evening, with Majority Leader Mitch McConnell pulling back members — many had already left for home for the weekend — to vote on a plan that would cut the weekly federal benefit to $200, or two-thirds of lost wages. Democrats unanimously opposed the measure.

While many Americans have relied on the $600 unemployment insurance throughout the pandemic, Mnuchin reiterated on “This Week” that his belief is that there’s no question “that it is a disincentive to find a job in “some cases.” “There are cases where people are overpaid,” Mnuchin said Sunday.

WATCH: Steve Mnuchin’s reaction to a study refuting his out-of-touch claim that $600/week enhanced unemployment keeps people from going back to work?

“I went to Yale.” pic.twitter.com/LISNdaJPPq