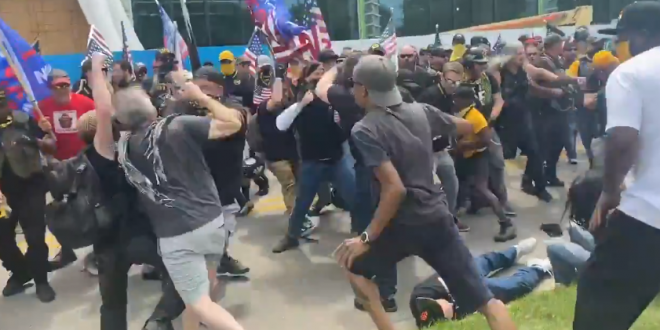 Members of the Proud Boys group moved through western Michigan on Saturday. The group originally planned to hold a rally in Arcadia Creek Festival Place in Kalamazoo, an outdoor area and event space. After hundreds of counterprotesters and police arrived at the location, the group began to move through the city.

Police had a large presence throughout the demonstration and could be heard over speakers telling crowds to clear from the area. A church reserved Arcadia Creek Festival Place at the same time the rally was set to start in what organizers said was a counterprotest against the Proud Boys.

The Proud Boys, a white nationalist group, were there for a planned rally.When the Proud Boys arrived a confrontation ensued in the streets. Some engaged in fist fighting before police arrived in the area and ordered the crowds gathered to disperse.

“Once we establish that civil unrest that’s when there’s that police line,” said Kalamazoo Department of Public Safety Capt. Vernon Coakley. Coakley said a few people were arrested, but didn’t know exactly how many.

In the clips below, you’ll see the flag of the white supremacist militia, the Three Percenters.

Most of the activity has moved back to the original spot where confrontation between the Proud Boys and counter-protesters began—Water and Edwards streets. I have personally seen one arrest; the man was loaded into a van closer to Rose and Michigan. @WOODTV pic.twitter.com/IyZwqYokwr

Police in riot gear have given a five-minute warning to clear the area until they start arresting people near East Water and Edwards streets. The Proud Boys have largely cleared out, overwhelmed by counter-protesters. @WOODTV pic.twitter.com/EVN8K0diHY

Proud Boys chased out of Kalamazoo within about half hour of arriving. Police still clearing the area now #Kalamazoo #BlackLivesMatter
pic.twitter.com/J5HzoLKN1L