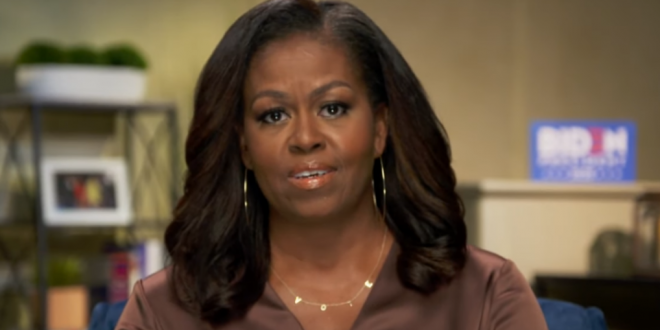 Michelle Obama’s DNC Speech: Trump Is In Over His Head, He Simply Can’t Do The Job, “It Is What It Is”

Michelle Obama had one message for Americans at Monday night’s Democratic National Convention: “If you think things cannot possibly get worse, trust me, they can; and they will if we don’t make a change in this election.” It was a dire warning, but it captured the essence of a speech marked by a sense of urgency and bleak realism. The former first lady painted a picture of what she said young people, including her two daughters, see around them in America today.

“They see people shouting in grocery stores, unwilling to wear a mask to keep us all safe,” Obama said in the prerecorded speech. “They see an entitlement that says only certain people belong here, that greed is good, and winning is everything because as long as you come out on top, it doesn’t matter what happens to everyone else.” “Sadly, this is the America that is on display for the next generation,” she said. “That’s not just disappointing; it’s downright infuriating.”

Halfway through her closing speech at the Democratic National Convention on Monday night, Michelle Obama shifted to address what she called the “cold, hard truth.” “Donald Trump is the wrong president for our country,” the former first lady said, looking intently at the camera.

“He has had more than enough time to prove that he can do the job, but he is clearly in over his head. He cannot meet this moment.”

“He simply cannot be who we need him to be for us,” she continued, and then sighed: “It is what it is.” In a matter of moments, those last five words — it is what it is — went from an old platitude to the buzziest sound bite on the Internet, becoming the instant highlight of a speech anchoring the DNC’s first night.

Trump’s cultists are accusing Michelle Obama of dissing Kamala Harris by not mentioning her name, but the speech was recorded before Harris was selected.