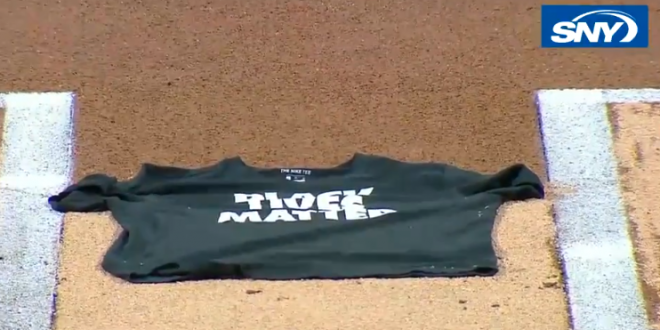 As team after team announced they would refuse to play games in protest of Jacob Blake’s shooting, the New York Mets and Miami Marlins still decided to take the field on Thursday night. And then they walked off.

After rumblings of a potential player protest, the Mets took their places on the field as scheduled. However, starting pitcher Michael Wacha did not throw a warm-up pitch, and the teams did not exchange lineup cards.

Marlins outfielder Lewis Brinson stepped into the box and both teams seemed in position to start playing, but only 42 seconds of silence, likely in honor of Jackie Robinson, followed. Both teams then exited the field, with Brinson leaving a “Black Lives Matter” shirt at home plate.

The Mets and Marlins took the field, had a 42-second moment of silence, and then walked off.

The only thing left on the field: a Black Lives Matter shirt.pic.twitter.com/JyckWkGQai

Previous Liberty Pastor Apologizes To Students For “Shameful” Falwell Scandal: “If It’s Christian, It Ought To Be Better”
Next Two Participants In Illegal White House Naturalization Ceremony Weren’t Told They’d Be Part Of Convention