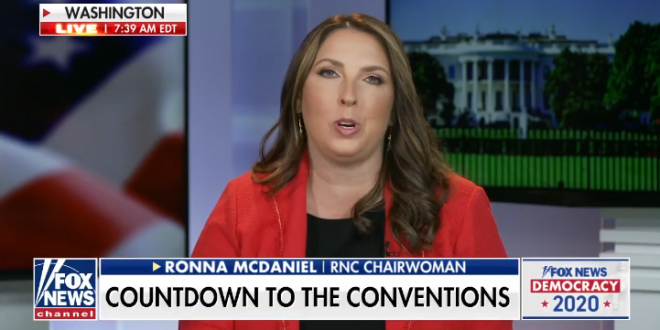 McDaniel: If Biden Can Live In His Basement, Trump Can Accept GOP Nom At His House, The White House

From the far-right outlet Newsmax:

President Donald Trump has every right to accept his party’s nomination at the White House, despite concerns from some that doing so could be a violation of the federal Hatch Act, because it’s “his house,” Republican National Committee Chairwoman Ronna McDaniel said Monday.

“Here is my personal opinion,” McDaniel said on Fox News’ “Fox and Friends,” when asked about complaints that have surfaced that the president is considering delivering his acceptance speech from the White House.

“If Joe Biden can live in his basement, the president has every right to talk in front of his house, which is the White House.”

.@JoeBiden owns his house in Wilmington. The White House belongs to the people of the United States of America, not @realDonaldTrump. A Romney should know the difference. https://t.co/IqryvRUnvN