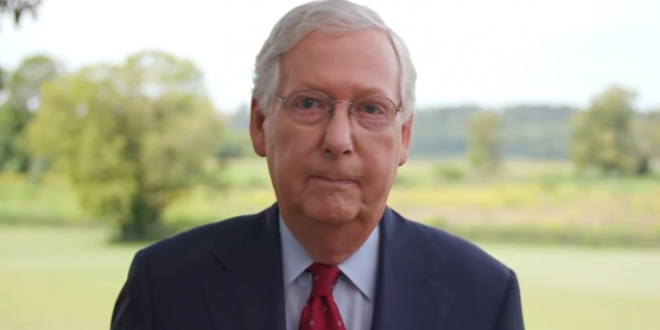 In his speech at the 2020 Republican National Convention Thursday, Senate Majority Leader Mitch McConnell warned that if Democrats win, police will be defunded, Second Amendment rights will be trampled — and Americans’ hamburger intake will be limited.

“Today’s Democrat Party doesn’t want to improve life for middle America,” McConnell (R-Ky.) said in a taped speech aired on the final night of the convention.

Majority Leader Mitch McConnell hailed Senate Republicans as the “firewall against Nancy Pelosi’s agenda,” while pitching himself as the only Washington leader looking out for “middle America” during the fourth and final night of the Republican National Convention.

“I am immensely proud of the work the Republican Senate has done,” McConnell said. “We are the firewall against Nancy Pelosi’s agenda. Like President Trump, we won’t be bullied by a liberal media intent on destroying America’s institutions.”

McConnell, a Kentucky Republican, noted that of the top three congressional leaders — himself, Pelosi and New York Sen. Chuck Schumer — he’s the only one from “middle America.”

The most laughable lie of the night so far: Mitch McConnell lying that Democrats even want to tell you “how many hamburgers you can eat.” That is, of course, a lie.

Sen. Mitch McConnell falsely claims Democrats want to tell you “how many hamburgers you can eat.” This may, or may not, be an exaggerated reference to Sen. Kamala Harris’s musings about dietary guidelines, which are not mandates.

Mitch McConnell warns Democrats will take away hamburgers (among other things) https://t.co/gK8TX3nLJB