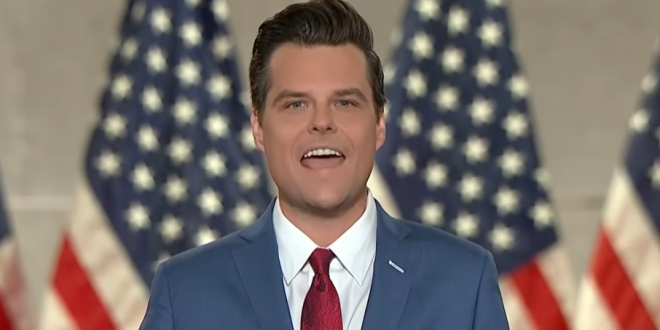 Matt Gaetz At RNC: If Biden Wins, He’ll Take Your Guns, Empty The Prisons, And Invite MS-13 To Live Next Door

“And they will settle because they know it’ll be like Weekend at Bernie’s — and they’ll be pulling the strings,” he continued, riffing on the 1989 black comedy film of the same name and suggesting socialist Sen. Bernie Sanders would be calling the shots. “But instead of a comedy, it’s a horror movie. They’ll disarm you, empty the prisons, lock you in your home, and invite MS-13 to live next door. And the defunded police aren’t on their way,” he continued.

The Florida congressman falsely claimed that Democrats will “disarm you, empty the prisons, lock you in your home, and invite MS-13 to live next door.” “And the police aren’t coming when you call in Democrat-run cities, they’re already being defunded, disbanded,” he said.

“Blaming our best and allowing society’s worst? That’s the story they write in Hollywood. That’s if the lights even stay on in California anymore. They used to write only in fiction, but nightmares are becoming real.” Cops killed, children shot,” he said.

“At the Democrat convention they say if you vote against Trump, it will all stop. Appeasement is never a winning strategy. No, we won’t settle for violence in our neighborhoods or at our border. We won’t settle for decades of bad decisions by basement-dwelling Joe Biden.”

Matt Gaetz opened the RNC. But who is home watching his “son”???

Matt Gaetz just spoke at the RNC. Not once did he mention:

Why? Because Gaetz & the GOP have no plan to fix any of it.

Wow! The Republican convention feels like a cross between Plan 9 from Outer Space and The Stepford Wives. But we all now know . . . the stars belong to Matt Gaetz.

Reminder that Matt Gaetz’s clumsily paced and rambling speech was written by a guy who was let go from the White House for having white nationalist ties: https://t.co/ChomBxi3cn

Matt Gaetz tried to make a Biden joke and referred to AOC and others as “Woketopians” who will “invite MS 13 to live next door” and I am not even making this up.

Maybe this is unduly literal of me, but it does seem strange to complain both that your opponent filled the prisons and that he wants to empty them.

Matt Gaetz just took the stage at the #RepublicanNationalConvention. Now might be a good time to revisit our piece on how Gaetz achieved his rise to political fame: his dad.

“Matt would be an assistant manager at Walmart if it weren’t for his father.” https://t.co/AtxEgxAVeM