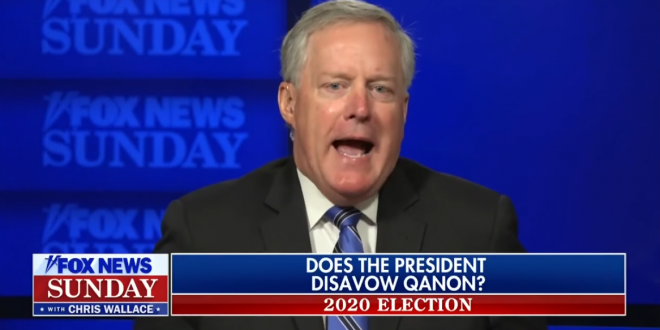 Mark Meadows Flips Out Over QAnon Question, Won’t Disavow, Claims He Just Had To Google Them [VIDEO]

“We don’t even know what it is,” Meadows told “Fox News Sunday” after host Chris Wallace asked whether the president would denounce QAnon, which the FBI has labeled a potential domestic terror threat. “It’s not a central part of what the president is talking about,” he added.

Trump’s chief of staff just refused to condemn the toxic and dangerous QAnon conspiracy. In 2019, the FBI classified QAnon as a domestic terrorism threat, but Mark Meadows just said he had to Google the conspiracy to know what it was.https://t.co/MKLLIsMclF

White House Chief of Staff Mark Meadows had a minor meltdown on Fox News Sunday after host Chris Wallace asked him to comment on Trump’s embrace of the conspiracy group QAnonhttps://t.co/HOWnjsDKo3

Chris Wallace to Mark Meadows: “Does the president condemn QAnon?” Meadows: “We don’t even know what it is. I had to look it up on Google.” Really? Because one hour earlier on #SOTU Homeland Security director Chad Wolf called it a “terrorist group.”

Don Jr supports these nuts. So does Eric. Flynn took the Q pledge. And they’re always at Trump rallies

Plus, Trump promotes conspiracy theories all the time. He appeared on Alex Jones for G-d’s sake

Now Mark Meadows claims they know nothing about Qanon

They are gaslighting us pic.twitter.com/fsZJdsvtxE

Asked about why Trump won’t disavow QAnon, Meadows immediately changes the topic to lying about the Obama administration spying on Trump’s campaign (it didn’t happen) pic.twitter.com/iyLTCQLa60