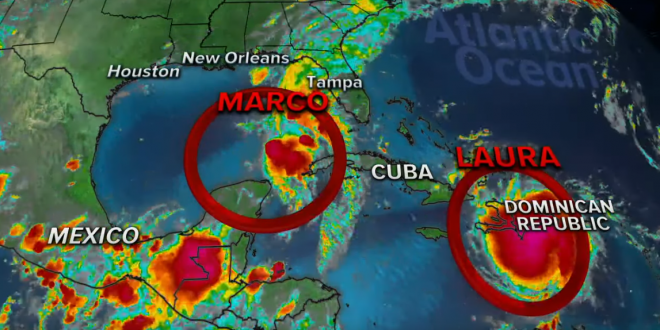 The US state of Louisiana issued mandatory evacuation orders on Sunday for four low-lying southeastern areas ahead of arrival of twin storms this week. The Orleans, Lafourche, Jefferson and Plaquemines parishes were told to evacuate after the National Hurricane Center said it expected weather conditions to begin deteriorating along the Gulf of Mexico coast early Monday morning.

Tropical Storm Marco is forecast to make landfall on Monday, followed by Laura’s arrival in the middle of the week. The two storms are expected to bring hurricane-force winds and flash floods. Public shelters will be open to residents starting Sunday. Evacuees have been advised to travel on their own due to coronavirus-related restrictions. People will have their temperature taken upon arrival and will be required to wear face masks.

⚠️ BREAKING: #Marco has been upgraded to a Category 1 Hurricane after Hurricane Hunters find winds in the eye wall of 75 mph (higher gusts). This was expected & doesn't change the forecast much — still expecting landfall in the New Orleans area Monday evening. @WJTV #tropics pic.twitter.com/kqXGCjFw14

Louisiana residents were ordered on Sunday to evacuate lowlying coastal areas as backtoback hurricanes were forecast to bring strong winds and rain, striking the state within days of one another this week.https://t.co/kiacuEQTpb

Grand Isle, Louisiana (Jefferson Parish) has issued a mandatory evacuation ahead of Marco and Laura. The order is already in effect. Curfew starts at 9 p.m.

MAJOR SHIFT#Marco now expected to make landfall in #Louisiana and so is #Laura. pic.twitter.com/XQe5lmjC87

NEW: #Marco has strengthened into a #hurricane in the Gulf of Mexico. pic.twitter.com/cJXCFjvpaF