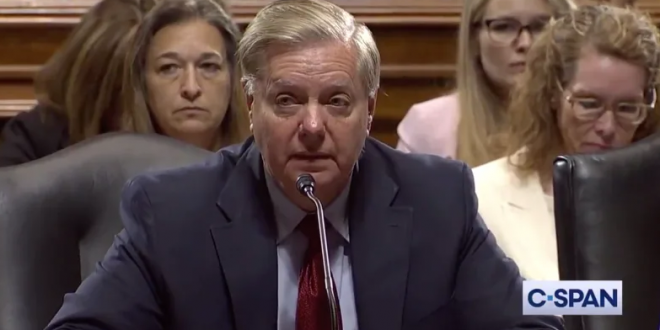 Sen. Lindsey Graham (R-S.C.) broke with President Trump on Friday by saying there is no debate over whether Sen. Kamala Harris is a U.S. citizen, remarks that came after the president encouraged a conspiracy theory that the California Democrat may not be eligible to serve as vice president because her parents are immigrants.

In a pair of tweets, Graham, a frequent defender of Trump, said he disagreed with Harris on “plenty of issues,” calling her “one of the most liberal members of the U.S. Senate.” But he said there should be no debate over her citizenship status.

Graham’s tweets come a day after Trump appeared to promote a racist conspiracy theory holding that Harris might be ineligible to serve as vice president because she was born to immigrant parents.

There are plenty of issues to find disagreement with @KamalaHarris regarding her record as Senator or as a Vice Presidential nominee.

She is consistently rated one of the most liberal members of the U.S. Senate, fully embracing a radical Democratic agenda.

However, there is no issue as to whether or not she is an American citizen.

She was born in the United States in 1964 to parents who were legally present.

Under the Constitution and Supreme Court precedent, she is unequivocally an American citizen.

Previous Trump’s Brother Hospitalized In NYC, Trump To Visit
Next National Review: Give That QAnon Nutbag The Steve King Treatment And Deny Her Committee Assignments